Surely the overriding reason for coming to Kars must be a trip to Ani, a strange, ghostly plain of buildings left over from the former Armenian capital, but now deserted for centuries.  Like any site that has been primped and preened by expectation, the danger lay in my initial, gut reaction.  And that was one of it being more of a mood piece than architectural extravaganza.  Not that there was much architecture left of the poor bastard.  Half a mosque there, the odd bit of cathedral there.  There was one whole building left, and that made a useful yardstick against which to take photos.

As was always the case in these situations, I made myself scarce from any other company fairly quickly : it’s so much easier to go your own pace.  Part of the site was distinctly off-limits : we were on the Turkish-Armenian border, after all.  I charged ahead : we had three hours to do this site, and I didn’t know how to apportion my time.  The camera was out in force, but it was difficult to strike a balance between the overall feel of the place and the detail of individual buildings.

The site was gloriously free of tourists, though, and it was quite eerie at times.  I passed by heaps of rubble and one wondered what stories lay there to be uncovered.  Attempts at restoration had been made, although by and large it was better left alone, or just a sympathetic semi-restoration.   It took me two hours of fairly extensive snapping, but I was through by midday…and out of water.  I set off to find a market but the heat drove me back to the gate, where our driver awaited.

On the way back, a bee stung him on the leg, something to which he is allergic, he cheerfully told us.  I had visions of having to drive back, his corpse bloating in the heat on the back seat, an appropriately black tongue protruding through clenched teeth.  Fortunately his allergy was only gradual : a cortisone injection from his GP this evening would fix it.  Oh, that’s a relief, I said through gritted teeth and flashed a look at my fellow passengers.  We were back in Kars by lunchtime.

After some pool of grease for lunch, the heavens opened and I retreated to the ever present cyber bar.  Eventually, I made my way out to Kars Castle on the outskirts of town.  In the gentle drizzle, the children playing in the mud made for a gut wrenching sight, and even I couldn’t take pictures.  The view, as is often the case in these situations, was better than the building itself, and I was greeted semi-warmly by Turks wherever.  Rather like Ani, the whole place seemed to hold ghosts of yesterday, and with the grey sky and ever-encroaching rain, it made for a rather depressing outing.

On my way down, I sipped a rather strange lemonade sitting outside a newsagent (the owner beckoned me to sit by him as I waited for the rain to stop).  I made my way back to my hotel room to sit out the rest of the rain.  Kars had atmosphere, there was no doubt about it.  A sadness, somehow, although I couldn’t put my finger on it.   The hotel staff seemed morose about something.  Probably me.

I went out for an early evening stroll.  All the shops had honeycombs strung up in the windows, embedded in wooden frames, and if I had been nearer the end of my journey, I would have been severely tempted.  I stopped in at last night’s restaurant, for the town’s finest “Ali Nazik”, a kind of meat and egg plant stew that was truly delicious.  I decided to book a flight with Onurair, Turkey’s cheapest flying coffin, to get me back to Istanbul on the 19th, from Gaziantep.  Later, I sat talking with the hotel owner, on a visit from the capital, to view one of his seventeen outlets around the country ! 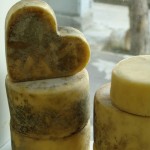 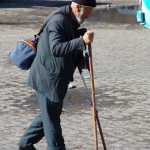 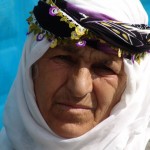 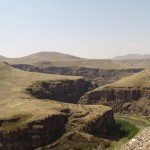 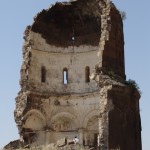